Call me the Daily Bugle because I’m here once again to talk to you, the public, about Spider-Man! Is he a menace, or a menace? All joking aside, I genuinely enjoy writing about the web-head so when the time comes for me to write a blog post, sometimes I can’t resist. 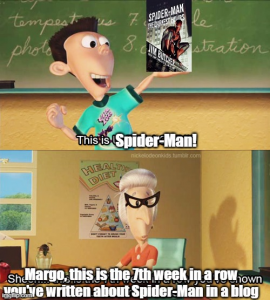 So, a few weekends ago, I had to go to class in Emporia. While the drive isn’t that long, it is long enough that I wanted something solid to listen to. I was flipping through Hoopla when I stumbled across Spider-Man: The Darkest Hours by Jim Butcher. To my surprise, it was an audiobook. Now, I love audiobooks and I love my best boy Spider-Man. I eagerly checked it out and got ready for the drive.

Comics are a visual medium and I am an absurdly busy person. Currently, I work two jobs and go to graduate school full-time. As sad as it is, I don’t have nearly as much time to read as I’d like. Enter audiobooks. I’ve loved audiobooks for about as long as I’ve loved reading so having a Spider-Man audiobook ticks all my boxes. I’m absurdly behind on comics right now, so it’s nice to be able to get back to something I love so much.

So, how is the audiobook itself? Overall, I really really enjoyed it. Spider-Man Darkest Hours falls sometime after the Spider-Man: The Other storyline from the early 2000s. The Other is one of the first comic series I collected as a teen, so I have a soft spot for it. Now, whether or not The Other is a good series, is somewhat contested among Spidey enthusiasts. I read it pretty early on in my comics-reading life so I think I’m a bit more lenient on it than other folks. (The Spider-Man: The Other discourse must wait for another day.) So, instead of being directly adapted from the comics, Spider-Man: The Darkest Hours is adapted from a novel. This makes the prose smooth and the narration flow really well for the medium it’s in. The narrator Jack Meloche makes a convincing Peter Parker. I’m extremely picky with how people voice Peter and he absolutely nails it.

I do have some cons. There are points where the narration feels VERY male-gazey. Peter you don’t have to spend this much time talking about MJ’s mouth. Like, I like beautiful women too but wowza. It didn’t happen often, but when it did I ended up rolling my eyes. I genuinely like Jim Butcher’s writing and I think it’s challenging to adapt a predominately visual medium into print and then to audio without going a little ham on the descriptions. The story definitely doesn’t pass the Bechdel Test. So many comics don’t, but I found myself noticing it more than I ordinarily would in audio form.

Otherwise, I would 100% recommend this audiobook if you’re a Spider-Man fan and you enjoy audiobooks.

So, my listening experience started me down a comics-to-audio rabbithole that I find fascinating. There are more adaptations on Hoopla. Unlike Spider-Man: The Darkest Hours many of these comics are adapted directly to audio form. From the ones I’ve dabbled in, they sound a lot more like a radio play than an audiobook.

This week, I’ve been listening to Kraven’s Last Hunt*, a classic and well regarded Spider-Man story.

Kraven’s Last Hunt is an intense story better suited for older fans. It follows Kraven the Hunter, a lower tier villain in Spidey’s rogue’s gallery as he seeks to vanquish his greatest foe. This storyline is intense and the audiobook does a fairly good job of adapting it to a different medium.

I’m a sucker for full-cast audiobooks where each character has a separate actor. The voice acting in Kraven’s Last Hunt is solid. The voices are distinct and expressive and do an excellent job of portraying the heavy emotion of the story. My main issue with the audiobook is that the sound effects are too loud. The audiobook is billed as “a movie you listen to” or “a movie in your mind” so it uses sound effects to add ambiance to a scene. My biggest problem with the audiobook is the sound mixing. Sometimes, footsteps will be absurdly loud and distracting. How can I pay attention to Kraven’s passionate speech when it sounds like someone is tap dancing around?!? I really wish they’d toned down the sound effects but it isn’t a deal breaker to enjoyability.

I’m excited to see how the other Spider-Man audiobooks hold up. They’ll keep me company as I binge-play Animal Crossing: New Horizons later this month.

Until next time, stay safe friends.

*Kraven’s Last Hunt contains depictions of suicide and may not be suitable for all listeners.