Rivers represent literal and symbolic change and transformation. I am dipping into a plethora of writing with river themes—reveling in reading which is immersed in waterways! To begin I am celebrating powerful and lyrical poetry.

In this present moment with acute awareness of the continued injustices marginalized people endure, I am recognizing the strength found in writing inspired by rivers. Historically rivers offered pathways to freedom from enslavement via the Underground Railroad. So it feels apropos to share this post so near to Juneteenth, the anniversary recognizing when news finally reached enslaved people in Texas, over two years after President Lincoln signed the Emancipation Proclamation in 1863. I hope these riverine writings provide fortitude to stand up to injustice and boldly create equity everywhere you have influence. 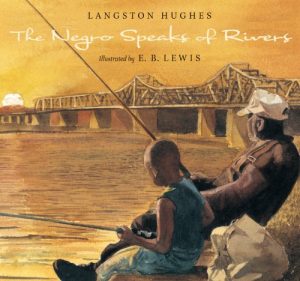 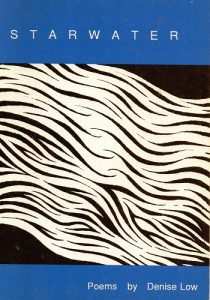 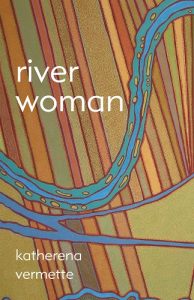 Langston Hughes wrote the poem “The Negro Speaks of Rivers” a century ago. While negro is an antiquated word, I hope and believe it remains respectful of people who identify as Black, African diaspora, and African American. Langston Hughes wrote these words when he was 18-years-old while traveling on a train on his way to visit his father. Langston expresses his strong sense of pride for his own African heritage; a pride that his father did not share. I am in awe of Langston Hughes's fortitude!

"The Negro Speaks of Rivers" by Langston Hughes

I bathed in the Euphrates when dawns were young.
I built my hut near the Congo and it lulled me to sleep.
I looked upon the Nile and raised the pyramids above it.
I heard the singing of the Mississippi when Abe Lincoln
went down to New Orleans, and I’ve seen its muddy
bosom turn all golden in the sunset.

Langston Hughes’s powerful words are gorgeously illustrated in vibrant watercolor images by E. B. Lewis in a picture book, titled as the poem; each line of the poem is illustrated on full, facing pages making this meaningful to everyone. Read my previous Reflections of Langston Hughes in Lawrence, Kansas, opens a new window.

When I mentioned to author Denise Low that I aspired to write an essay to celebrate books of rivers, she shared a copy of her book Starwater. She also noted this was an important writing experience for her. It’s one of her earliest books. Unfortunately Starwater is currently out of print, but it is at least available to read at the KU Libraries, opens a new window.

I am grateful for these magical flowing words, a vivid homage to rivers and all that is linked to water. While recognizing Indigenous tribes' connections to places, this poetry is a sensual and lyrical assemblage, a celebration to the movement of water, rain, glaciers, time, animals, and cherished human relationships. Starwater is a dreamy love song to revisit and experience new discoveries and inspiration with each reading! Many rivers are named here including the Kaw, Delaware, Wakarusa, Missouri, Mississippi, and many others well beyond this region. The Native American tribes who are recognized in these pages include: Blackfeet, Dakota, Delaware, Kansa, Kickapoo, Lakota and Navajo. Low’s heritage includes Delaware (Lenape/Munsee), and Cherokee family members. Learn more about Denise Low via Wild Hybrid Reality Tales, opens a new window.

One of the poems which resonate especially deeply for me is “Delaware Marker”—so I wondered if she had known that she had Delaware heritage when she wrote Starwater and Denise replied: “I knew there was some connection but not sure.”

Delaware campsites.
sink into rich silt here,
safe in a crook of the Kaw River.

"Fifteen thousand Delawares made peace
with William Penn in 1682,"
reads the marker.
Two hundred years later, in Kansas,
a thousand of them were left.
they paused by the Kaw
in their long journey.

They watched the moon rise
and set on the river-hoop.
Their pipes offered prayers into mist.

If we listen carefully,
these cornfields are blessed—
"As long as the moon rises on the Kaw
and sets on the Kaw
there will be peace."

Katherena Vermette is a new author to me, yet much celebrated—especially in Canada. She is a member of the Métis First Nation based in the Canadian province of Manitoba. Her debut poetry collection North End Love Songs won the Governor General’s Literary Award for poetry. She’s also a novelist and writes graphic novels; see what the library has available by Katherena Vermette in the catalog, opens a new window.

I’m currently reading and relishing Vermette's River Woman, her second poetry volume. This book opens with a quote from Chrystos, another poet. Chrystos declares that everything, including poetry is political and there is no place we can hide to escape violence and injustice and wait for it to go away. Expect many rapids in Vermette’s river connected poetry!

The title poem “River Woman” feels epic. I wish I could hear Vermette reading her own powerful words! The copyright restricts me from sharing exact quotes, so I’ll paraphrase the meaning: she is metaphorically connecting the Red River to Indigenous women and every river to humanity’s mother with visual description that is realistically raw yet still hopeful. People have manipulated rivers much like abuse experienced by women, especially Indigenous women. Her spirit and power carries on, river as woman and woman as river.

I am inspired to acknowledge traditional Native lands. In our region near the Kansas (Kaw) and Wakarusa Rivers, I want to honor the Dakota, Delaware (Lenape), Kansa (Kaw), Kickapoo, Lakota, Osage, Sac and Fox, Shawnee, and actually hundreds more tribes who find connection here with Haskell Indian Nations University. As Ken Lassman (author of Wild Douglas County, opens a new window and Kaw Valley Almanac, opens a new window) noted: “Haskell Indian Nations University is the United Nations of tribes, with members of hundreds of tribes coming here over the lifetime of its existence.”

Rivers seem to offer an ever flowing muse for writers; I admit to being hip deep in exploring stories where rivers play an inspiring role. I hope these reflections will provide you with fortitude to stand up to injustice and boldly create equity everywhere you have influence. In the months ahead I hope you’ll watch for my musings about many river-connected stories,naturalist's explorations, memoirs of kayaking adventures and more via this series: A Confluence of Writing on Rivers!

Read part 2 of A Confluence of Writing on Rivers: Heartfelt Wisdom and A Wide View of the Mississippi River, opens a new window; an interview with Eddy L. Harris

Read part 3 of A Confluence of Writing on Rivers: The Water Dancer Lyrically Connects the River With Memory, opens a new window

Gratitude to Denise Low for permission to include her "Delaware Cemetery" poem.

More appreciation to Denise Low, opens a new window for helping me make sure I acknowledged each Native American tribe by their preferred name.

Margo Farnsworth introduced me to the River Network, opens a new window and their apropos efforts.

Langston Hughes's poem "The Negro Speaks of Rivers" is in the public domain, opens a new window, first published in The Crisis: A Record of The Darker Races, New York, NY, USA: NAACP, June 1921, p. 17.

Credit to Philip Cushway and Michael Warr for the phrase "Of Poetry and", used in the title for this post. Cushway and Warr are Co-editors & Compilers of the book Of Poetry and Protest: From Emmett Till to Trayvon Martin, opens a new window, published by W. W. Norton Company

The Negro Speaks of Rivers, opens a new window

River Woman, opens a new window by Katherena Vermette is available in Hoopla as an eBook.