TikTok is a strange and baffling place. Even though I’m a semi-regular user and create content for the library’s TikTik page (sidenote: go follow us, we’re super fun), I don’t understand how or why certain trends happen the way they do. Several months ago, the song “No Children” inexplicably became a TikTok trend. “No Children” is a song about a bitter divorce from The Mountain Goats’ 2002 album Tallahassee that includes lyrics like “I am drowning / There is no sign of land / You are coming down with me / Hand in unlovable hand / And I hope you die / I hope we both die.” My TikTok page was flooded with video after video of people either dancing to the song, or being upset that people were dancing to the song. It was such a strange and briefly wide-spread phenomenon that there was a Vox article about it. 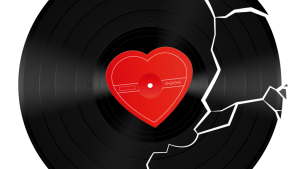 TikTok is a platform that isn’t built for nuanced discussions of 20 year old songs about divorce. TikTok is built for silly little dances, rancid fandom discourse, and straight book influencers recommending Song of Achilles while thinking they’ve solved homophobia. Some old school Mountain Goats fans took umbrage with teens dancing to the song. To them, the teens were annoying interlopers who fundamentally did not understand the depth and emotions of the song. How could they not understand that they were dancing to a song about divorce? Having annoying teens running around listening to your favorite song by your favorite band and liking it “incorrectly” seemed a near-traumatic experience for some fans.

Here’s where I cut in and say that I’ve been a Mountain Goats fan for a very long time and it took me an embarrassingly long time to realize that “No Children” was about divorce. I’d always wondered why it was called “No Children” because there weren’t any lyrics about kids. A {redacted because it was embarrassingly not that long ago} number of years ago, it hit me that the song was called “No Children,” because the couple getting a divorce in the song didn’t have any children together. Like the TikTok teens of today, I spent my teenage years not understanding the song but loving it anyway. I stumbled across both the band and the song when YA author John Green mentioned the now defunct joke website “themountaingoatswillcureyourbieberfever.com” which I immediately went to because I was deep in my “I’m not like other girls and pop music is bad” phase. Here’s a video of what the website would have looked like back in ye olde 2012.

I fell in LOVE with the song, even though I couldn’t really figure out what it was about. I sang it constantly, on the bus, on roller coasters, and really anywhere it would be situationally inappropriate for a teenager to belt a song about a dysfunctional divorce. I wish I was joking, but I really was that annoying. It was my favorite song and not understanding the lyrics didn’t change my appreciation for it. Over time, I grew up and learned more about the world and the song changed. It was a great song when I didn’t know what it was about and it’s even better now that I do. I adore media like that. Things that can be meaningful to you even if you don’t completely understand them. I love books that feel different each time you read them, songs that you age into, and movies that give new details with every rewatch.

One of those books for me is Gideon the Ninth by Tamsyn Muir. Pitched as “lesbian necromancers explore a haunted gothic palace in space,” Gideon the Ninth is one hell of a read. It’s witty and lovely and deeply confusing. My first read-through took me a few tries and a switch from reading the print book to the audiobook to finish it. It wasn’t so much that I didn’t understand the book, but the book is so packed with information and foreshadowing that you can miss things if you aren’t careful. The sequel, Harrow the Ninth, is no different. With the third installment in the series, Nona the Ninth, coming out this fall, I’ve been re-reading Gideon. I’m not exaggerating when I say that this re-read makes the book feel entirely new. There are so many lines that could have been throw-aways that come back with a vengeance in the sequel. Just like “No Children,” Gideon the Ninth was still a thoroughly enjoyable experience even with missing context, and only improves over time. Seriously though, if you ever read this series, go back and re-read the first installment in the series after reading the sequels. Finding new details this readthrough has been deeply rewarding.

There’s a tendency, especially in spaces passionate about what they love, to gatekeep people who don’t like things “correctly” or who don’t understand your favorite piece of media as deeply as you do. I’m certainly guilty of this, at least internally. While I’d never ever do or say anything to someone to keep them out of a piece of media I loved, I’ve had the occasional gatekeep-ey thought. But, I’ve also had so many things weirdly gate-kept from me. (See: Man at a comic convention in 2016 absolutely shocked that not only had I played Witcher 3, but that I knew more about it then he did. He just kept repeating “But how do you know about it? How did you play it?” Which is an absurd thing to say about an extremely popular AAA video game. It’s also great and you should play it if you haven’t!) I get the impulse to keep people from misunderstanding what means a lot to you, but I think that loving media that you don’t quite understand is also completely fine. It’s a testament to that art’s ability to reach people. If they ever do gain a greater understanding of a book, movie, or song, how exciting is that for them? They get to experience a piece of media that you both love in a new way. So, may misunderstanding No Children by The Mountain Goats remain a weirdly relatable rite of passage for teens of the internet. From experience, there’s so much beauty in a piece of media that takes a little bit of extra time to really understand. Now, if you'll excuse me, I'm off to re-read Mountain Goats front man John Darnielle's book Universal Harvester because I think there are some things I didn't quite get the first time around...