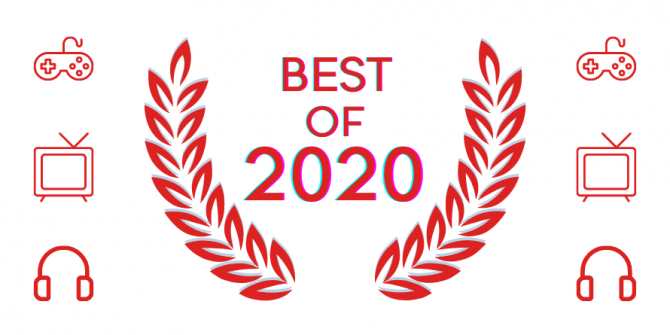 It's no secret that 2020 was a stinker of a year, but here are some of the silver linings that got LPL staff through it.

This time around, we didn’t limit our media choices to things published in 2020, instead we just asked for whatever people loved the most (but most of them ended up being pretty recent). Hope you’ll check them out (library pun INTENDED). Also included are links to lists with even more choices.

Ruby
Ugh, I have two and I guess they're both technically from 2019.
Portrait of a Lady On Fire This incredibly beautiful, slow-burning film had me leaning hard into queerantine longing...fantasizing about long walks on the beach...googling painting supplies and long flowy dresses...

Corpus Christi It's so hard for anything to hold my attention during this dumpster fire year - this movie was one of the few things that got me to stop doomscrolling and actually follow a story. I was not disappointed. Funny, raw, and deeply emotional.

Mary
Parasite - Incredible, and I can't do scary! - Mary

Polli
There were movies in 2020? Oh! Yes. Enola Holmes on Netflix. STELLAR! While you're waiting for the movie to drop, you can find theThe Case of the Missing Marquess (Polli is our readers services coordinator in case you couldn’t guess- Ed.)

Sean
Tenet - The seemingly high-concept time travel in this movie can be a little complicated to understand, but visually it plays perfectly. This movie is another striking sci-fi spectacle from Christopher Nolan.

Jake C
Black Eyed Peas - Translation, Kylie Minogue - Disco, Lady Gaga - Chromatica, Melanie C - Melanie C. I've also had 90's withdrawal this year so Now That's What I Call Dance Classics was a great reminder of the two-tone denim days. It has some classics to shake your rump to. I also borrowed Savage Garden - The Singles, and Spice Girls - Greatest Hits people will probably not admit it but I'm sure that you'll be humming along to both.

William
Pieces of You by Jewel - This year marks its 25th anniversary, and to celebrate, Jewel released a remastered edition with demos, outtakes and other unreleased songs. I listened to this constantly as a teen, and I've nostalgically been relishing in  raw cuts of old hits like "Foolish Games" and "You Were Meant for Me."

Mary G
The Lightning Thief musical cast recording - This came out in 2017 but I just got around to listening to it back in June, I am still obsessively listening to it. Percy Jackson fans and non fans would enjoy this musical. The music is catchy and fun and retells the story of the lightning thief with all the accuracy the 2010 movie did not .

Margaret
There were so many good albums this year. However, the one song that stuck out to me is an old Alvvays song from 2014 called "Archie, Marry Me". I am surprised I missed it because it is the perfect romantic anti-wedding song. It resonated with me after seeing so many people my age deciding to get married and have kids.

Kimberly
Folklore by Taylor Swift - What can I say about this magnificent album that hasn't already been said? That it's transcendent? That this album is the figurative equivalent to wearing a giant oversized sweater, a pair of boots, and cronching over some leaves in a forest whilst wistfully staring into the distance? 100/10, go listen. If you've already listened, go listen again.

Randi
Doc Martin, all 9 seasons - It was the perfect year to revisit the endearingly quirky characters who live in stunningly picturesque Port Wenn.

Becky
The Great British Baking Show (all seasons) - No kidding, this BBC series is my all time favorite cooking, reality, and competition show. The contestants are all super talented, thoroughly delightful, home bakers.  There is no spitefulness in the competition.  The final prize is a lawn party celebration and a cake plate.  This show is an antidote to stress. But be warned-you will bake or at least eat baked goods/ice cream/desserts during or immediately after watching each episode!

Dan C
Seven Worlds, One Planet -  In my happy place, David Attenborough is my imaginary grandfather.  So this year I clung to this 7-part BBC nature documentary, every bit as good as the others these folks have made (Planet Earth, Blue Planet, etc.).

Sarah
Animal Crossing: New Horizons - My villager, Marshall, and all of his friends got me through those first couple of months of lock down. Right now I've got a pretty sweet pumpkin patch going in my yard. - Sarah (Mary G and Mary W also chose Animal Crossing as their game of the year)

Kevin
Ghost of Tsushima - When I was a youngster my mom would take me to the library or rental store almost every Friday night. I'd use each of my mom-allotted checkouts on movies like Ninja Scroll, Seven Samurai, Shogun Assassin, Harakiri, 47 Ronin, and so many more. Samurai games have come and gone over the years, and as someone that loves the genre, a lot of subpar titles have scratched my Bushido itch, but Ghosts of Tsushima is the first time I've really felt immersed in the art of swordsmanship. The combat system is designed so that you learn to adapt your fighting style as the game progresses to the point where you feel you can really master a technique, instead of button mashing until the game is finished. There's no lack of cinematic elements to the fighting either. Standoffs provide a Kurosawa-esque pop of flair in addition to a tactical advantage, and they always leave me breathless.

Ian
Super Smash Bros. Ultimate - You know, Animal Crossing definitely took over my life for the first MONTHS of the pandemic, and if I had to pick the game that best defined 2020 that'd be it. BUT since this is just my personal fave, I always go back to Smash Bros. Collecting all the spirits, playing 8 "person" (me and 7 computers) smashdowns, getting the courage to play online and getting mercilessly destroyed, love this game! - Ian

These are just a handful of our favorites. Take a look at the lists we made for the library catalog:

What got you through 2020? Sound off in the comments!