Summer vacation is just over the horizon, and while I’m sure some of you are looking forward to hiking through dense woodlands, roasting marshmallows over a crackling campfire, and perhaps even tanning by a cool, calm lake, there are a few of us who look forward to avoiding the Summer’s oppressive heat like vampires. That’s right, if you’re a bookish homebody like me, you’ll be preparing for battle with mosquitos, hoping not to sweat through all your summer tees, and praying the cool shade of lazy, sailing clouds will linger just long enough for you to get through a book chapter on your buggy picnic. If all fails, you’ll be indoors.

It’s tough for folks like us to deal with…“the outdoors”. We don’t do “the outdoors”. At most, we might prefer reading by the poolside. We look forward to those nights at home with a book so gripping we haven’t realized it’s 3 AM. But an energizing hike through the wilderness to “get away from it all?” An invitation to participate in a secluded camping trip by the lake? A week’s stay in a secluded cabin, deep in the woods where no one can hear you scream? Have you not seen Friday the 13th?!  Many would call those of us who are indoor vacationers a bit paranoid. We prefer the word “cautious”.

At this point you might know where I’m heading with this. Here are five summer horror novels to validate those of you who prefer a summer vacation to consist of the safe, air-conditioned confines of civilization to the wild, humid, buggy outdoors. 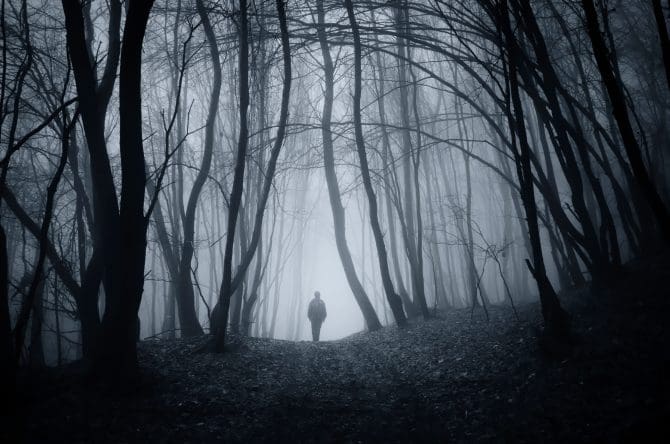 If you’re looking for a summer thriller with queer representation, open-ended conclusions, and a gut-wrenching plot, look no further than  The Cabin at the End of the World by Paul Tremblay. This story follows two fathers and their 7-year-old daughter who are vacationing in a remote New Hampshire cabin by the lake for the summer. Strangers arrive to hold the family captive and warn that among them, a sacrifice must be made to avoid bringing on the end of the world. This is highly recommended for readers who don’t necessarily want gore and dread, but love to be held in suspense and want their hearts ripped from their chests.

Taking the scare factor up a notch, we have The Ruins by Scott Smith. This is a gripping horror novel about two American couples vacationing in Cancun, Mexico when they are roped into helping a German tourist named Mathais find his missing brother in the jungle. Accompanied also by three Greek tourists and using nothing for navigation but a hand-drawn map, the large group sets out on the search when they happen upon Mayan ruins in the jungle and a hidden path that leads to deadly trouble in the form of carnivorous plants. In my opinion, this is a survival narrative at its best, with plenty of body-horror to make you gag and enough suspense to make you anxious for the characters. This is a book for readers who love to throw books across the room in frustration as much as they love to throw popcorn at their tv screen and yell “You idiot, don’t go in there!”

Fans of horror tropes where characters are trapped and fighting for survival might also find The Troop by Nick Cutter an unputdownable read. In this book, we are introduced to scoutmaster Tim Riggs and his boy scouts on their 3-day camping trip on a small island off the coast of Nova Scotia. What starts out as a harmless and fun night of marshmallow roasting and stories told ‘round the bonfire turns into a living nightmare when a bioengineered threat washes ashore and stumbles upon the group. I will warn that this book will not be for the squeamish or faint of heart. Told from multiple character perspectives, articles, and log entries from scientific experiments, readers will be thrown into an unpleasant, dark fight for survival similar to William Golding’s Lord of the Flies and Eli Roth’s horror film Cabin Fever. An excellent book that tackles the turbulent road of male adolescence as well as the well-intentioned but consequential effects of scientific progression.

Not a fan of long, tiresome hikes? Neither am I, and the same goes for the characters from Adam Nevill’s The Ritual after they find themselves lost deep in the Scandinavian wilderness. Four former university friends embark on a hiking trip to catch up on old times when a shortcut leads to them getting lost. Disoriented, hungry, and irate, the hikers are forced to rely on little knowledge of their wilderness survival skills, and the stakes rise when they come across pagan ruins and fresh corpses. You can really feel the tension amongst the lost men through Nevill’s fantastic writing, and it’s an excellent reading choice for those who are curious about Scandinavian folklore.

Are you still here? Good! Because my final recommendation is probably the most gruesome of the five. Some readers go into a book purposefully hoping to be filled to the brim with dread, just like other readers go into a book hoping to have a good cry. If you are that very messed up reader, this novella…will ruin you. Translated from French, The Laws of the Skies by Gregoire Courtois is about twelve Kindergarteners and their three adult chaperones who go on a camping trip in the woods. None of them survive. (No, that isn’t a spoiler.) That’s it. That’s the story, and your only job as the reader is to witness how these characters meet terrible ends. But Courtois’ writing will keep your attention, because it is his intention to make the reader feel helpless as they’re dragged through pages of nature’s unfeeling harshness. I recommend you go into this book expecting to be disturbed, upset, and horrified.

The Laws of the Skies

These aren’t really book recommendations to deter people from adventuring into the great outdoors this Summer. This isn’t even an attempt to rain on the parade of nature lovers. Instead it’s my not-so-subtle way of saying “I see you” to the readers who opted out of that hot, rocky mountain getaway or that trek through the deep woods. May these very gruesome, very outdoorsy horror novels bring you validation as you sip a refreshing glass of lemonade from the comfort of your cushy reading chair.