Ever since Baby Yoda stepped on screen sipping his soup and stealing the hearts of anyone who has never seen a Mogwai-- YEAH, I SAID IT-- I've been thinking about my favorite Christmas movie of all time*: Gremlins. Honestly, I am always thinking about Gremlins, Yoda baby or not. But seeing Gizmo's over-sized ears, fluffy little face, and round, doe eyes on a daily basis in memes comparing him to Baby Yoda has me so full of nostalgia I might burst like a Gremlin in a microwave. Merry Christmas.

Gremlins was released in 1984 which means it's been 35 years since we first met Gizmo. That's 35 years since Rand Peltzer, local inventor, purchases the most adorable creature in San Francisco's Chinatown and brings him home to his son, Billy, while instructing him on the mogwai's care:

#3) The most important rule of all-- Never, EVER feed him after midnight.

I'll give you three guesses as to what happens.

Listen, I don't want to hear any questions about what constitutes "after midnight" or why snow melting under gremlin feet doesn't seem to count as water. Statements like, "All light, even moonlight, is technically sunlight," are meaningless to me, Neil Degrasse Tyson! We are here to watch little monsters terrorize a picturesque town after all of the rules are predictably broken, and we will willingly suspend our disbelief while doing it. Where did they get those tiny outfits? Why have they stopped to sing Christmas carols? How have they learned the English language so quickly? Who cares!? It's amazing.

What wasn't so amazing in 1984 was CGI and thankfully you will not find much here. Gremlins has masterful puppetry throughout. A tactile puppet, handled well, will outshine CGI and a green screen any day. In fact, some of the most fun parts to watch are when the real-life dog, Barney, interacts with Gizmo and the gremlins. You can see that he is reacting to something he believes is real. It should come as no surprise that actors consistently perform better when they can see what they're responding to, whether they are human or animal actors. Films that have been "fixed" later with CGI by directors who cannot leave well enough alone have become laughable in parts. Drew Barrymore has famously said that when she was filming E.T. as a child, she believed he was real and even tried feeding him between takes. Try sitting through Steven Spielberg's updates to that film today. It is painful. Drew wouldn't be sharing a sandwich with that nonsense, I can guarantee. (In his defense, Steven Spielberg has stated his regret regarding those changes.)

Gremlins stars Zach Galligan as Billy, Phoebe Cates as Kate, and Howie Mandel as Gizmo. Yes, you read that right. Howie Mandel. I know it's upsetting and I'm sorry. There's also a throng of supporting cast members from the 1980s who, it seems, were in every movie made in the 1980s, including Corey Feldman, Judge Reinhold, and Hoyt Axton. I had to take a peek at the NYT review from 1984 and it is hilarious. At that time, Vincent Canby wrote, "The high point of the film comes when Kate, Billy’s pretty girlfriend, admits why she hates Christmas." WHAT!? EVERYONE KNOWS THAT'S THE WORST PART OF THE MOVIE. In fact Cates as "pretty girlfriend" Kate is a royal buzzkill throughout. There's even a tongue-in-cheek reference to this in Gremlins 2 (which I cannot recommend as whole heartedly as its predecessor, but it is a fun amplification of some of the wackier gremlin personalities).

If you've read any of my previous blogs, you know that I spend a lot of time skipping down the memory lane of my youth. (I'm just trying to make sure at least one person from Gen X is remembered!) But this movie stands the test of time regardless of nostalgia. Oh, speaking of nostalgia, here I am as a child in a Gremlins nightgown: 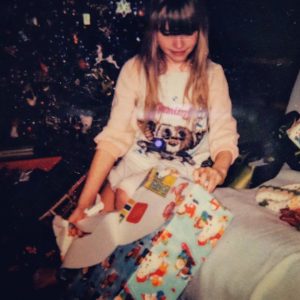 Wait. I think I may have just disproven my point. Or something. Anyway, here I am as an adult in a Gremlins sweater:

Listen, what I'm saying is, Christmas is better with a mogwai... and I might have some issues with letting things go. Also, yes, Baby Yoda is cute but does he play a keyboard in a Santa hat? Does his little wet nose move like a bunny rabbit's while he sings songs? Does he drive a Barbie car in a mall? This is what makes great cinema and nothing else will convince me otherwise! So, to quote Rand Peltzer at the end of the film, "This season, if your air conditioner goes on the fritz or your washing machine blows up or your video recorder conks out; before you call the repairman turn on all the lights, check all the closets and cupboards, look under all the beds, because you never can tell... there just might be a gremlin in your house." And you should consider yourself LUCKY.

*I may have proclaimed It's a Wonderful Life as my favorite Christmas movie in a blog post last year.