You don’t have to say what I’m sure you’re all thinking. What business does the Spooky Librarian have with the holiday season? Why does she keep popping up on the Lawrence Public Library homepage to share scary stories instead of warm, cozy, feel-good reads?

Well, believe it or not, Christmas Horror and holiday ghost stories are a thing! In fact, many of you are already familiar with one of the most famous Christmas ghost stories of all time, Charles Dickens' 1843 novella A Christmas Carol. This beloved tale of goodwill and redemption has quite a dark beginning: "Marley was dead, to begin with. There is no doubt whatever about that. The register of his burial was signed by the clergyman, the clerk, the undertaker, and the chief mourner. Scrooge signed it. And Scrooge's name was good upon Change for anything he chose to put his hand to. Old Marley was dead as a door-nail."  Death is introduced on the very first page and the notoriously greedy Ebenezer Scrooge is haunted by many ghosts on Christmas eve, starting with his old business partner Marley. So why pretend ghosts and Christmas aren't a match made in heaven? Why not add a few more ghosts to your Christmas reading list? After all, as the Spooky Librarian--yes I've officially knighted myself with that title--it’s my job to make sure people know they exist within the LPL catalog! So allow me to add a bit of ghoulish fun and fright to your holiday! 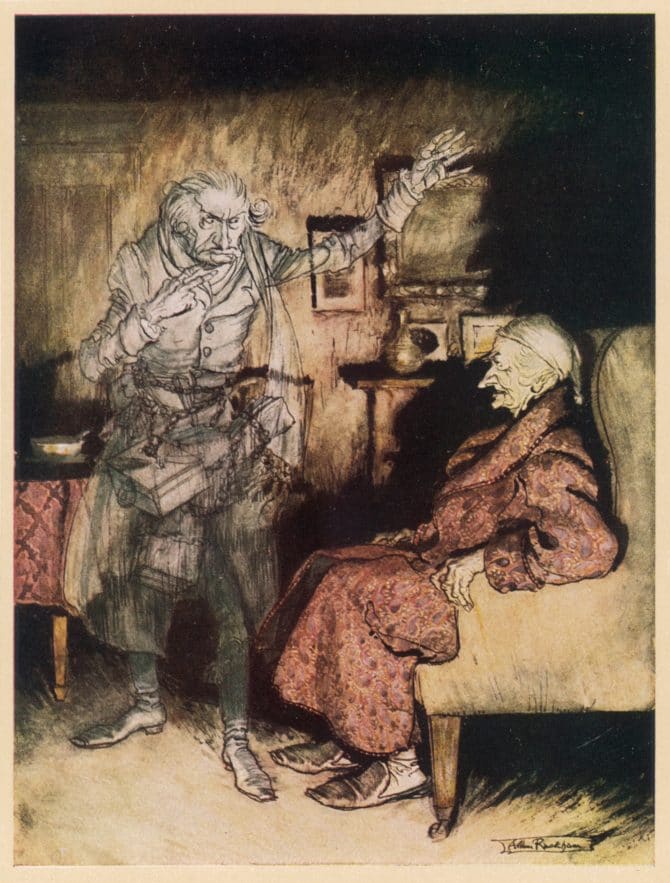 “There was no longer any question what she was, or any thought of her being a living being. Upon a face which wore the fixed features of a corpse were imprinted the traces of the vilest and most hideous passions which had animated her while she lived.”

Telling ghost stories during the Christmas season was actually a very popular Victorian pastime. Family and friends would gather round the fire on a cold, wintery evening and read chilling ghost tales published in magazines and newspapers. The tradition is even referenced in Andy Williams’ very popular Christmas song It’s the Most Wonderful Time of the Year:

and tales of the glories

of Christmases long, long ago…

With all that being said, by checking out a copy of The Valancourt Book of Victorian Christmas Ghost Stories, you’d technically be keeping up with that old tradition. This collection goes beyond your common knowledge of Dickens' ghosts of Christmas past, present, and future. Readers who enjoy 19th century literature will be thrilled and chilled to read stories about wandering ghosts, voices in the dark, and flickering candlelight. Now, mind you, this was the Victorian era, so the writing is very leisurely paced, eerie, and atmospheric rather than gory, fast-paced and suspenseful. My recommendation is to enjoy this collection by tackling one story at a time each day, (preferably evenings) with a glass of wine or a hot cup of cocoa. Light a scented holiday candle, curl up in bed or on the couch and really settle in.

The Woman in Black

“Yes, I had a story, a true story, a story of haunting and evil, fear and confusion, horror and tragedy. But it was not a story to be told for casual entertainment around the fireside upon Christmas Eve.”

Jumping on the back of Victorian ghost stories, The Woman in Black, with its eerie, gothic setting, is the perfect Christmas ghost story. On Christmas Eve, narrator and protagonist Arthur Kipps recalls the tragic, terrifying story of a grieving and unforgiving mother who’s ghost acts out a violent vengeance on the children of anyone unfortunate enough to see her. Susan Hill published this story in 1983 but her writing has an authenticity that feels as if you’re reading a Christmas ghost story from the 19th century. (Also the movie adaptation starring Daniel Radcliffe will always be one of my favorite moody, gothic, horror movies...soooo there’s a lot of bias that comes with this book rec.)

I’ve been recommending this book all year but it’s perfect for this season due to much of the terror in this story taking place during the days leading up to and following after Christmas day. Suffer the Children is a multi-perspective, contemporary, apocalyptic novel about the world’s children mysteriously dropping dead—harsh, I know. Parents are terrified and devastated, until one day all the children come back to life. The world rejoices, but the children are changed…and thirsty….for blood. And only blood can keep the children alive, so parents become desperate, tensions become high, and violence is inevitable. Author Craig DiLouie creates a very harrowing narrative on just how much a parent will do to keep their children alive, and this book is the epitome of the saying “children will bleed you dry.”  Lovers of books like Stephen King’s Pet Sematary or Justin Cronin’s The Passage should definitely add this to their reading lists, and fans of unconventional vampire stories and dystopian/apocalyptic fiction will not be able to put this book down!

“The thing people really hate remembering, even as they celebrate a guy nailed to wood: all Gods demand a sacrifice.”

Based on the book cover and title alone, I had to include this anthology of holiday horror stories. Eighteen contemporary horror authors have contributed their own tales of festive fright and there’s a little something for everyone! From toys who desperately want to be loved to gift exchanges turned deadly, you’ll get chills without ever having to step foot into the bitter, wintery cold. This is a great anthology for readers who want to consume their holiday horror in bite-sized chunks rather than novel proportioned platefulls. It’s also an excellent read if you want short stories set in the present day rather than attempting to tackle 19th century ghosts.

In this epic story of blood, magic and traditions of old, a struggling musician finds himself caught in the middle of a vicious battle between Santa Claus and the great Yule Lord Krampus. In this book, naughty and nice are not laid out in black and white. Santa believes himself to be a “servant of God”, spreading peace, goodwill, and charity, while Krampus is passionate about reminding mankind of their connection to the earth, beasts and spirits of old. All of Brom’s characters are beautifully developed and complex. Religion is a huge theme throughout as the narrative juggles Norse mythology, Pagan rituals and Christian traditions. What I particularly love about the book are the gorgeous illustrations with which the readers are provided. For those who aren’t familiar, Brom is not only a talented writer but an outstanding artist and his illustrations are an added treat to the reading experience. Horror lovers will be pleased to know there is lots of bloodshed in this book (lots of it…so much blood) while Fantasy lovers will be thrilled to fall into the folklore and magic sprinkled throughout. So please give this book a read if you’re wanting an unconventional holiday story with multi-perspective storytelling and epic battles between your favorite Christmas/Yuletide icons.

Looking to have a Christmas horror binge-fest? Here are some honorable mentions below that are sure to satisfy your frightful needs for the horror-days...er...I mean holidays!

THE SHRIEKING SKULL AND OTHER VICTORIAN CHRISTMAS GHOST STORIES

The Thief of Always