The other day, I did something that I haven’t done in a long time, and I don’t just mean in our current sense of remembering pre-pandemic days long time. I mean like 5 to 10 years, take you back to the good ol’ days, long time. I bought a CD. I wandered over to Love Garden, flipped through their new releases, and bought an actual album on a physical compact disc. Peeling the cellophane from the jewel case and flipping through the booklet took me straight back to my youth.

What moved me to do this, you ask? Along with a desire to support local business, one of my long-time top favorite artists, Alanis Morissette, recently released a new album, and like I’ve done with books and authors, I’ve always purchased CDs from my top favorites. And yes, it’s been YEARS since any of my top favorites have released albums. Eight, to be specific in Alanis’s case. 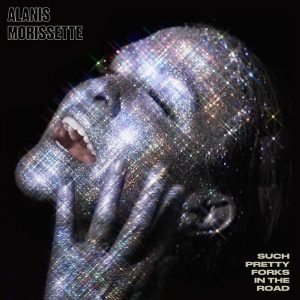 Such Pretty Forks in the Road, opens a new window is Alanis’s first full length release since 2012’s Havoc and Bright Lights, opens a new window. There’s lots of piano, lots of wordy, introspective lyrics, and lots of emotion. The lead single, “Reasons I Drink,” offers a jaunty beat with an exploration and explanation of Alanis’s vices. “These are the reasons I drink, the reasons I tell everybody I’m fine even though I am not…” It’s exactly the song I would’ve imagined a middle-aged Alanis would write, and I love it.

Other standout tracks for me: the beautiful ode to her children, “Ablaze” (for which she filmed THE most adorable video, opens a new window from her home, which has a library to die for); “Missing the Miracle,” a mellow song about losing focus of what’s important over a differing of perspective; and “Sandbox Love” with its opening synths reminiscent of 80’s power ballads and catchy AF chorus (just listen to it).

In their review, Rolling Stone closed with, “For all of its melancholy, Such Pretty Forks feels personal but never profound.” Call me a biased superfan who’s followed her career since Jagged Little Pill, opens a new window, but I must disagree. What is profound? To me, personal is profound, and in a time when accomplishing anything beyond surviving the day is a feat, I find solace in the transparency, honesty and humanity offered in this record. That has deep meaning to me.

Whenever one of my top favorites releases new music, I pull out my dusty old CD binder, tug the zipper along its worn teeth, and flip through the past. One thing that has calmed my soul amid the doom and gloom of 2020 has been the promise of new music from many of my favorites. If you love Alanis Morissette, or other 90’s originals like Fiona Apple, Lisa Loeb, and Sheryl Crow, who’ve also released new albums recently, check out this list:

The 1990s were a great decade for women in music. Alanis Morissette, Sheryl Crow, Jewel, Lisa Loeb - just to name a few - produced several chart topping hits and sold millions of albums across the world. Here's a look at where they started and where they are today: