For the past few years I’ve been obsessed with a mysterious display case at the Baker Wetlands Discovery Center. It contains a number of carved wooden models of tiny creatures called tardigrades, derived from the Latin "slow walker." Also known as “water bears” for their bear-like shape, these microfauna have inched their way into the public imagination in recent years. For one thing, they are cute as heck, especially for a microscopic creature that doesn’t really have a face. But it turns out they also may be the most resilient animal on Earth, since they can get themselves into a state of suspended animation and survive a hundred years or more when things get too hot (above the boiling temperature of water), cold (I mean very cold, like -459.67 degrees Fahrenheit cold, aka Absolute Zero), or just plain boring (actually I’m not so sure about that last one). They can even survive in space without tiny spacesuits, the only animal tough enough to do that. On our planet they live everywhere. 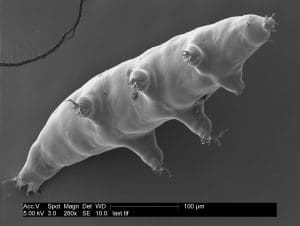 Kids are especially attracted to tardigrades. A recent picture book, My Tiny Pet, by Jessie Hartland, relates the story of a girl who tracks down a tardigrade in a nearby forest, identifies it with her own microscope, and keeps it as a pet. Michael Hearst, whose chronicles of curious people, buildings, and vehicles have been some of my favorite children’s non-fiction titles of the past decade, also takes up tardigrades in his Unusual Creatures (he even penned a song about them, the PBS video of which is a great 5-minute primer on this fascinating animal).

A label on the display case at the Wetlands tells me the carvings were made by William R. Miller, whose name is also on the cover of an issue of the Kansas School Naturalist dedicated to tardigrades on display there. We’ve been worrying so much about stuff we can’t see making us ill, I figured it was time to celebrate a microscopic organism that means us no harm, so I pledged to figure out who this person was. He was not difficult to find, since a career spent researching tardigrades has resulted in his name being attached to countless articles, web sites, and projects associated with them. Turns out he goes by Randy, he's a professor at Baker University, and was nice enough to spend a morning with me talking tardigrades. Here is what I learned.

When I ask Randy Miller to sum up the animals he has studied for over forty years, he does so wonderfully: “The tardigrade is a biologically fantastic creature about which we know very little. It lacks a circulatory system, respiratory system, and skeletal system, three of the major systems animals have. It has eight legs, but they come from different segments, when in most animals, legs come from one segment. They can desiccate, suspend their own metabolism, and survive almost anywhere. And that’s just the kind that live on land.”

How to catch a tardigrade

Find some moss, lichen, or a bird’s nest. Soak in water. Look at the water under a dissecting microscope. Boom, tardigrade! Mount that critter on a slide and it will stretch out and turn transparent so you can look even closer.

Tardigrades can live in bird poop

And on birds, and on mammals. The traditional place to hunt for tardigrades is moss and lichen from trees, the higher the better, and wind was thought to be their main method of long distance transportation. But one of Miller’s major discoveries came when a hummingbird crashed into his window and died. Little did it know, it had sacrificed its body to science. Miller checked it for tardigrades and found one, establishing their presence on birds. A student of his, working in a lab in Oregon, noticed a bunch of red tree vole nests (who doesn’t have a few of those lying around?), checked them for tardigrades, and established their presence on mammals. So now we know they hitchhike.

Someday tardigrade-watching may be a thing

In addition to describing new species and genera of tardigrades (Miller and his students have discovered 17 or 18 new species, 3 or 4 of which came from the Baker Wetlands), a main goal of tardigrade research is to determine the “what is where” of the animals. Because they are so small and not much is known about them, scientists don’t have a good map of where tardigrade species are typically found. Birders know it when they see a bird that is way out of range, but we don’t yet know which tardigrades live where. Miller dreams of an Audubon Society-like citizen science component to tardigrade research, through which amateur tardigrade watchers can create this knowledge by way of crowd-sourced observations.

Because they are such survivors (and let’s face it, they just look like aliens), some speculate that tardigrades may not have evolved on Earth, but arrived here from space. Miller and his colleague at Baker, Ran Sivron, a physics professor, wrote a paper examining this possibility. They crunched the numbers and figured out how long it would take an asteroid to get here from the nearest star system, Alpha Centauri, then factored in variables like temperature, velocity, and a lot of other stuff that made my head swim when Miller told me about it. Their conclusion, as far as I can make out: Not bloody likely, but interesting to think about.

“Tardigrades are the only cute invertebrate”

Says Miller, but he sometimes just calls them the “cutest” invertebrate, “to avoid arguments” (I assume with roly-poly fans who don't want to be left out of the discussion). I mention how prominent tardigrades have become in popular culture and ask if he may feel a bit like someone whose favorite obscure rock band suddenly has albums going platinum. “I totally support the wow and the cute,” he says. “Every school kid can tell you what a tardigrade is. But we lose them after that.” His goal: “To get from the ‘wow’ to science.” To that end he strives to find dedicated students who want to do professional-grade science, and their results attest to their commitment and his teaching, as seen in these two Lawrence Journal-World stories.

Miller’s wood carvings have at least one famous fan

Finally, I get to ask about the carvings. Miller taught himself how to carve out of necessity. “Tardigrades have one backward set of legs, which isn’t easy to see on slides. That’s why I started carving models out of wood, so my students could see.” The day I met him, he showed me a model of two tardigrades expertly crafted from a large block of wood. They were as beautiful as a pair of tardigrades can be, and clearly took hours to complete. And it turns out I’m not the only fan. Miller tells me that E.O. Wilson, possibly as close to a rock star as a biologist can be, keeps one of Miller’s carvings at his desk, says it proofreads his writing over his shoulder, and used it in his classes at Harvard.

Tales From the Ant World

When Miller deadpans that he has always wanted to train tardigrades for nano-assembly, I fall for it. He follows that up with a proposal to sell tardigrade salt to raise money for more research.  When I ask him what the heck he is talking about, he shrugs and says, “I figure if Paul Newman can sell salad dressing, people might buy tardigrade salt.” At that point I realize he is pulling my leg.

That’s what he is called in the The Arbornaut, a new book by Margaret Lowman, aka “Canopy Meg,” the Jane Goodall of trees. Lowman dedicates an entire chapter of the book to a grant she and Miller conceived and were awarded by the National Science Foundation to train and employ students with physical disabilities to climb trees, collect samples, and study tardigrades, all based on the idea that walking should not be a prerequisite to do field work in biology.

Money talks, but wonder is worth it

“They don’t cause or cure disease, they don’t affect our crops,” Miller says of tardigrades. “They aren’t a major food source for anything, and they aren’t a major predator of anything, so if they disappeared from the earth, it might be noticed, but possibly not that much.” This lack of economic impact, he says, can sometimes limit interest from funders. But listening to him talk for an hour about a career spent studying the world of the “lichen-moss complex,” I’m ready to look on eBay for a used dissecting microscope and head for the nearest tree. It would be foolish to say dollars don’t matter, but Miller’s work is a great reminder that no one can put a price tag on wonder.

Tardigrade researchers don’t all wear t-shirts with tardigrades on them that say “Live Tiny, Die Never”

At least, Miller wasn't wearing one when I saw him, but I couldn't help noticing them for sale online, and I hope he likes the one I send him for teaching us all so much about tardigrades.