Staff of the LPL inventoried the whole library recently and I was lucky enough to be tasked to help undertake the local history room. I found the most fascinating things. I have worked at the library for many years and I never made the time to examine what was exactly in the Osma collection. I thought it was just city records, yearbooks, genealogy, and old phone books.

Instead of just those things I listed, I found many peculiar publications, photobooks, memoirs, and essays. I wish to share a few of my favorite finds in no particular order. 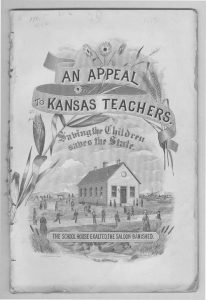 An Appeal to Kansas Teachers, or you may know it by, An appeal to Kansas Teachers on Behalf of Temperance, Health, and Moral Purity, this pamphlet on prohibition was published in 1889. It was mailed to each Kansas school superintendent and to 11,500 school teachers. It was to be used by the teachers and passed along to the pupils and their parents. You thought this might be just a report to dissuade the drinking of alcohol and tobacco? Well here is a passage surely to aggravate many who think they are pure of social evils. The author states: "The novel devotee come to be a slave to fiction, and not only loses appetite for wholesome, useful reading, but loses the power to digest it. Reading fiction is a sort of mental dissipation, in a higher degree damaging to the powers of the mind, especially the memory. The habitual novel-reader find his mind closed to the class of books which prepare people for usefulness in life, and its is only by a strong effort that he who has devoted the reading hours of his youth to fiction, is able to break away from its toils and learn to read history, ethics, and philosophy." 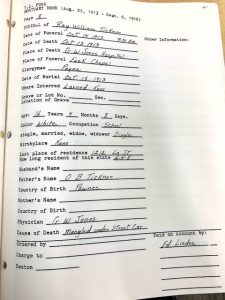 Funk Mortuary Records. In the oh my word section we have 4 books with hundreds of records from the Funk Mortuary, covering the period between August 25, 1913 and September 3, 1927. Funk Mortuary was founded in 1909 by T.D. Funk and George Shaffer. In 1911, Funk assumed full ownership; he operated the mortuary until its sale in 1953. Following a series of changes in ownership, the mortuary is today known as Warren-McElwain Mortuary. This record book contains a photograph of Funk's horse-drawn hearse; a hand-written copy of a Lawrence Daily Journal article on the mortuary's 1911 sale and information about deceased persons prepared for burial at this mortuary; and an alphabetized index. The first photo is an example of a record that states the man's cause of death was entanglement with a street car. 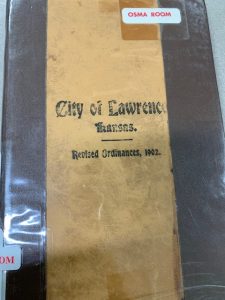 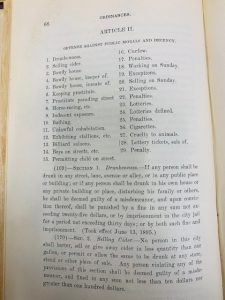 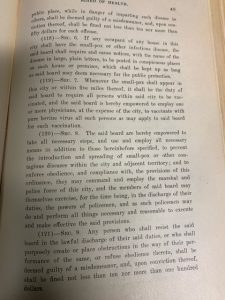 City of Lawrence Kansas Revised Ordinances 1902. This one is a real hoot. Are you curious about what the local laws were starting back in 1880, regarding cleaning your privies, working on a Sunday, or selling cider? We have the books for you! In particular, I found Article 118, Section 6, interesting. This section states: If any occupant of any house in this city shall have smallpox or other infections disease, the said board shall require and cause notice, with the name of the disease in large, plain letters to be posted in conspicuous places on such house or premises, which shall be kept up as long as said board may deem necessary for public protection.

Black Panther Party, Part 1: Investigation of Kansas City Chapter Committee on Internal Security House of Representatives 1970.Congressional Hearings: Hearings beginning an investigation into activities of the Black Panther Party. Includes photographs and documents submitted by staff and identified by witnesses. My quick and dirty verdict? Much ado about getting in others people's business. 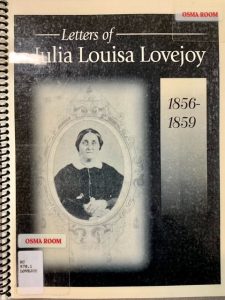 Because I believe I was a pioneer in a previous life, I think the memoirs we have downstairs are incredibly interesting. Books such as journals of residents who lived through Quantrill's Raid, Amos Lawrence-a philanthropist who founded Lawrence and KU, diaries of people who were settlers in the area, slave narratives, and one of my very favorite artists, Elizabeth Layton. Elizabeth, a Kansas native, is notably known for curing her severe depression through art drawing and the therapy it provided her.

You can also find the customary books found in most city library's history sections in ours as well. We have city directories from far back as 1866-present. Local phone books starting from 1936.  Also, we have yearbooks from Kansas University, Haskell and the local high schools.

These items and many more strange and cool things are found in the Helen Osma Local History Room. Helen was a longtime librarian at Lawrence Public Library, who worked here from 1952 until her death at 82 in 1986. During renovations of the library in 1991, a space dedicated to local history was named in her honor.

-Angela Longhurst is an Accounts Assistant at Lawrence Public Library.