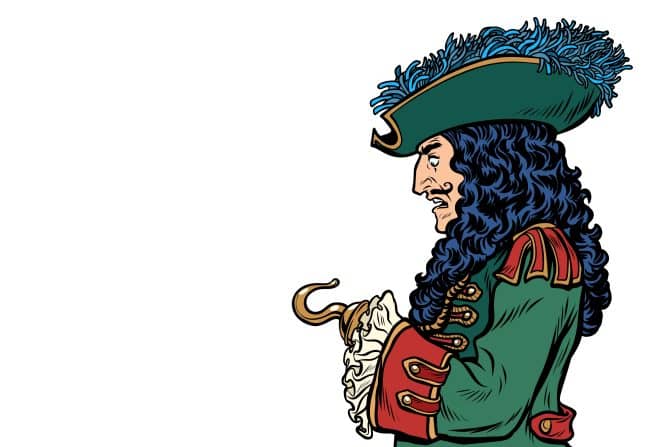 We all have a favorite villain, one you either love to hate or perhaps hate to love but just can't help it. There are actually several villains that hold a place in my confused heart, but none have ever knocked Captain Hook out of the top spot. And it was Dustin Hoffman's portrayal of him in Hook that really sealed the deal.

His general sense of presence in the film was brilliant, of course. He completely took over every scene he was in, even when sharing the screen with the late, great Robin Williams. But it was the palpable emotional turmoil, the latent goodness that really drew me to his interpretation of Hook, and, I think, planted a seed that grew into an intense fascination with villains. I just always want to be as conflicted as I was as a child, looking on the "bad guy" with awe and something akin to tenderness. To this day I seek out stories with polarizing characters, whether they be deeply flawed protagonists or sympathetic antagonists.

The legend of Peter Pan happens to give me both and I’ve been delighted by my discovery of some recent retellings that really turn the classic tale on its head. All of them posit the obvious question of: Hey, isn’t Peter’s whole kidnapping schtick a little weird? Yes, yes it is, and THERE ARE GAMES AFOOT.

After reading Wendy, Darling by A.C. Wise, I just can’t look at any of it the same way anymore. To me and millions of other children, Neverland always seemed like a utopia, Peter Pan its hero. This book reveals a darker side to the land lost beyond the stars and the boy who could never grow up, painting a new and sinister portrait that I just can't shake. We never learn what happened to the Darlings after their return from their adventures with Pan. And we are barely given a glimpse of their true feelings about being whisked away from their home and family in the middle of the night.

In Wise's imagining, their return to their world was fraught for one sibling in particular: Wendy. John and Michael can't remember anything of their adventure, but Wendy can't forget. She leads a very difficult life, learning to deny what she knows as the truth to pacify those around her. And then the nightmare begins anew when Peter returns for her daughter.

I really enjoyed this story, despite Captain Hook only existing within it as a sort of shadow, or ghost, haunting the changing landscape of Neverland. But when we learn that Peter isn't the hero we've always believed him to be, it stands to reason that his foe was deeply misunderstood as well.

(Lo and behold, halfway through though this blog post I became aware of A.C.Wise's just published novel, Hooked. Now THIS is a story centering the Captain, his escape from Neverland and reluctant return to defeat Pan for good and all. I am very anxiously waiting for it to come in on hold for me!)

A perfect follow-up to Wendy, Darling that gave me the piece of the story that was missing was Alias Hook by Lisa Jensen. A far departure in style, this was a dense and pretty comprehensive origin story of my favorite marauder. Captain James Benjamin Hook is a well-read man of the Restoration Era, who through bad luck and a fair amount of terrible decisions, becomes a cursed privateer. Banished to an island of malicious children, fated to lose battle after battle, the Captain's psyche is eventually whittled down to a place of grim acceptance.

That is, until a strange woman appears in Neverland, a completely incongruous addition that baffles the Captain as much as the boys. Her purpose there is a mystery, but Captain Hook knows that when it comes to the magic of Neverland, there are no accidents. And perhaps she holds the key not only to his heart, but to a return to his world.

Hot off the press is Darling Girl by Liz Michalksi, a unique *contemporary* retelling that deals with the Darlings as they exist today, multiple generations removed from Wendy, Michael, and John. Holly Darling, granddaughter of Wendy, is a brilliant scientist and CEO of a booming cosmetics company. She also has a past wracked with trauma and an uncertain future raising her son, Jack, alone. So many things involving her family's real history with Peter Pan have been kept from her, and she has so many poisonous secrets of her own. They all come to a head in this propulsive and dark story that is also a thoughtful examination of grief, sacrifice, and motherhood.

Christina Henry deserves a shoutout for her years of work in the dark fantasy/fairytale retelling genre, including Lost Boy, an account of how James came to be the arch nemesis of Pan. (Spoiler alert: It's not just because a heroic Peter fed his hand to a crocodile.) It's an explanation that makes so much sense, fits so seamlessly into the story we all already know, that I was left wondering why I didn't think of it myself. Henry is truly a queen of reimagination and I love her crisp writing style.

It's clear at this point that Peter Pan is facing a reckoning and Hook a redemption in modern literature and I am SO here for it. If you are too and want more, or just love retellings in general, please reach out to me through the Book Squad's Personal Recommendation Service. I'd love to connect you to the perfect, nostalgic, fairytale adventure.