Of all the picture books I’ve read to my kids, Chris Monroe’s have been some of the most fun, so I was pleased to hear a new Netflix streaming series based on her Monkey with a Tool Belt books is in the works. Monroe’s versatility rivals that of her plucky primate protagonist, Chico Bon Bon.

She’s written and illustrated books about a pair of sneaky sheep, a bike riding ladybug, and a dog who can walk on two legs, not to mention titles she has illustrated for others. In the meantime, she cranked out a weekly comic strip, Violet Days, which ran in Minnesota newspapers for over two decades. Monroe was gracious enough to answer a few questions recently about her life and work. 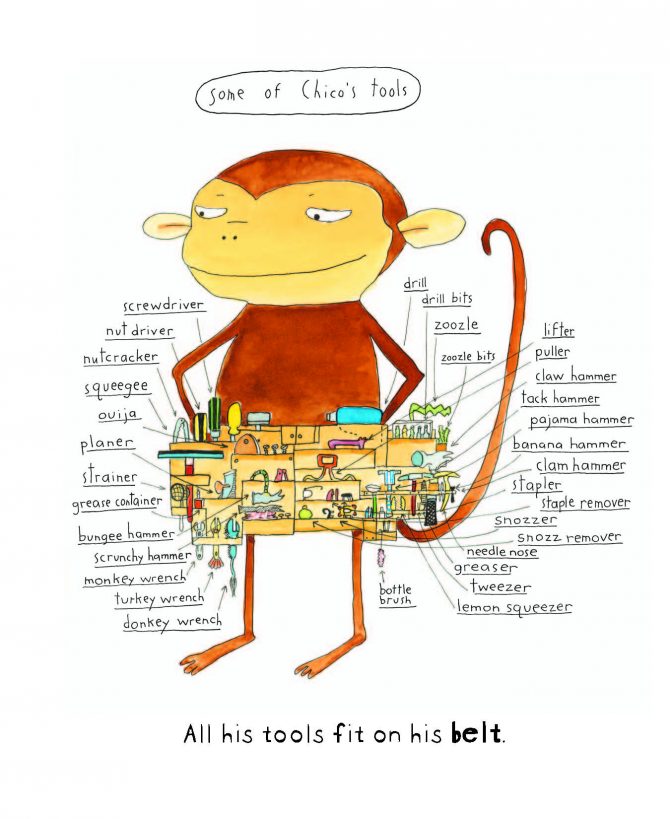 DC: Your Violet Days strips really capture the essence of being a kid in the 1970s and ‘80s.  I see a lot written lately about how much childhood has changed since then. What do you think?

CM: I think certain things about being a kid are always going to be the same. Having fun hanging out with your friends, listening to music, making each other laugh.

One big change of course—I've definitely seen groups of kids hanging out and they are actually all checking their phones and basically ignoring each other. You hate to see this great hang time be wasted for no reason. It seems so alienating. Obviously not all kids are like that, but I feel sorry for kids who are addicted to their phones. I hope that has a backlash and kids move away from that someday, and honestly, I think they will. Because kids are cool. Kids are free-thinkers. They'll rebel. 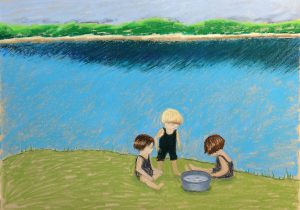 DC: Critters of various species, ready to tell it like it is, are ever present in your work—monkeys, ducks, sheep, squirrels, dogs, even the pickle and nickel in Bug on a Bike. Have you been a prolific pet owner, or are you more comfortable just drawing twitchy, bushy-tailed wise guys?

CM: I've pretty much had pets on and off for my entire life. Lots of cats when we were kids. Lots of tragic cat deaths. A misunderstood peekapoo named Max. Siberian Huskies when I was in college in Minneapolis and that was just stupid. They were awesome pets but South Minneapolis was not their ideal habitat for working off stress. A dog named Red Dog who dug so many craters in the lawn and buried food in the furniture. More beloved cat tragedies. Lots of years as a renter when I moved back to Duluth, so no pets. Now I have a min pin named Riley and my life is complete.

DC: When I visited La Jolla, CA, where Dr. Seuss spent much of his life, I saw what looked like real-life truffula trees growing everywhere, and his work made a different kind of sense to me. You’ve spent most of your life in Minnesota, and continue to live in Duluth.  Do you think the Midwest environment has influenced your visual style or the content of your stories? 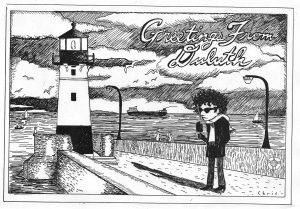 CM: My visual style is definitely affected by living and growing up in northern MN. Particularly in my oil pastel drawings and watercolors.  I like to try to draw trees, water, dark forests, night skies, moonlight, animals, and so yes, I am shaped by it.

I think my comic is certainly a reflection of where I am from, I mean, definitely the childhood stories, they'd have to be by their very nature.  But I hope it taps into universal themes.

DC: How does your process differ between creating comics and children’s books?  Do you prefer one medium over another?

CM: I have a very similar process for both children's books and comics. I tend to brainstorm, write a lot of things down in my notebooks. Sift through that, edit, expand on ideas. I always put together a rough outline. For the Violet Days comic I break the idea into five points. Picture books have to fit into 32 pages. So it's a tight space for both.  I think about how the art can tell part of the story for both books and comics.

I wrote the first monkey book the exact way I would approach writing a comic. I didn't know how to do it another way. I was basically winging it.

In a way, children's books are easier because there's more time involved, and it is all baby steps. With the comic, the deadline is looming. With both--I write to myself. If I like it, I trust it. I try to, anyway! It can be really anxiety producing if you have doubts. I've at times been overwhelmed by illustrating and the reality of how many different ways there are to depict a character. It's hard to know when to stop, pick one, move ahead. You could literally draw a walking dog a million ways. You have to choose. Dial it in. The comic is much less involved. Decisions are made quickly. It's scrawly. It's funny. It cracks me up sometimes.

I don't really prefer one over the other if I have the time and space to do them. Right now I am enjoying illustrating a picture book. It's fun to not think about the writing.

Enjoy these books by Chris Monroe:

Bug on A Bike

Monkey With A Tool Belt and the Noisy Problem

Monkey With A Tool Belt and the Seaside Shenanigans

Monkey With A Tool Belt and the Maniac Muffins

Monkey With A Tool Belt and the Silly School Mystery