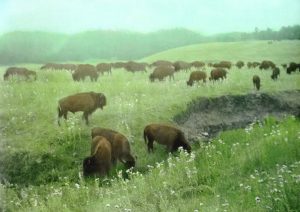 I treasure wildlife sightings. During the winter season I sometimes glimpse bald eagles soaring in the sky outside my kitchen window, and I’ve been fortunate on several occasions to see beavers swimming in the Haskell-Baker Wetlands. Last summer my East Lawrence neighbors and I were frequently serenaded by the territorial calls of barred owls. Being reminded that wildlife still thrives nearby is reassuring for the future of our environmental heritage.

I’ve been musing more than ever about wildlife since I started reading American Serengeti: The Last Big Animals of the Great Plains, opens a new window by Dan Flores –a book recommended to me by local author George Frazier. I reviewed Frazier’s book earlier; The Last Wild Places of Kansas, opens a new window inspires an appreciation for the remaining Kansas wilderness using wry wit to share his personal adventures and historical anecdotes which enhance context.

Frazier commented to me that what is most salient about American Serengeti is the skill used to link the experience of a place with the accounts of early explorers’ writing.

Flores describes camping in the White Cliffs Narrows of the Upper Missouri River; the reflective surface of the white cliffs create a stunning-visual sensation at sunrise.

I had never been on the Missouri River before. But standing there under that impossibly lit sky, watching ducks arrowing low over the surface of the water and a small herd of mule deer pogoing away through hoodoos and pedestal rocks at my sudden appearance, while a coyote yipped a dawn serenade across the river, after a few moments it came to me. I had read books and pored over nineteenth-century art and dreamed daydreams of the wilderness Great Plains for much of my life, and now here I stood, on the banks of the Missouri, in the very stretch where Meriwether Lewis had wondered whether these scenes of “visionary inchantment would never have and end.

This place was déjà vu for me not from some past life, but from the minds of others, who had made me know what a magical world the Great Plains once had been. The poetry of the plains was considerably fainter in my time on earth, but this particular morning on the Missouri I was hearing enough of the passages to realize that despite all, we had not entirely lost the American Serengeti. Not yet.

Flores features many vivid accounts like the example above. This is accessible natural history focused on a selection of some of the most charismatic mammals that used to flourish in the Great Plains, including: pronghorns (antelope), coyotes, horses, grizzly bears, bison, wolves, and humans. Candid discussions of early explorers’ accounts of seeing great numbers of wildlife and the harsh reality of these predecessors’ responses is sobering.

It seems everyone who ventured into the Great Plains from Lewis and Clark to John James Audubon was compelled to kill. But Flores frames this book with hope, describing efforts by a nonprofit group based in Montana working to expand the American Prairie Reserve, opens a new window.

The goal of the organization is to re-create a sustainable ecosystem, bringing back all the wildlife that thrived in the Great Plains for the past two centuries on an expanse of land even larger than Yellowstone National Park.

The library also has a copy of Dan Flores other recent book, Coyote America: A Natural and Supernatural History, opens a new window. I am anxious to read this book, especially because I enjoyed the chapter in American Serengeti on coyotes.

Kirkus Reviews noted that Coyote America is “…a spirited blend of history, anthropology, folklore, and biology.” While most of the large herds of charismatic mammals are drastically reduced, coyotes have thrived and expanded their range even into urban environments. A few of my neighbors have reported seeing a coyote exploring nearby in Lawrence.

Another venue to appreciate the message of Flores’ book is expressed in the similarly-titled documentary American Serengeti, opens a new window. This is a beautiful, romantic, and sentimental story of conservation heroes, focused on the American Prairie Reserve.

Finally, a more local view of similar efforts is the focus of the documentary The Tallgrass Prairie National Preserve, opens a new window. This national park in the Flint Hills of Kansas celebrated their 20th anniversary in 2016 at the same time the National Parks celebrated their centennial.

I can’t help but reflect on the words of Dan Flores now while appreciating the natural vistas at the Haskell-Baker Wetlands; I hope we all eventually see more of a sustainable, holistic Great Plains with all the charismatic fauna like the vision of the American Prairie Reserve.