As I am writing this, we are now in the midst of winter. It means long cold nights with nowhere to go. Days being stuck inside due to more miserable weather and COVID. I am desperate for some escape TV. Now that The Office is no longer on Netflix and I have pretty much exhausted all of the other shows I had watched before, I needed a new show. While I watch way too much television, I am also pretty picky when picking a show. Usually, I abandon a show after a few episodes due to boredom or getting distracted. Then I was reading about people re-watching The Sopranos during the lockdowns, and I got curious. I found myself one evening starting up an episode of The Sopranos. Since then, I am nearly done with the first season and trying my best to savor the show because it is good.

The Sopranos is about a mobster going to therapy while dealing with everyday problems in modern America. Unlike mob movies in the past, the Sopranos is so much more than that. It has a mixture of a family drama, a crime show, and surprisingly a work sitcom. There is not one character that has not felt flat or interesting to watch. All of these characters feel like real people with their own complex emotions and personalities. All of the writing, directing, and acting is just top-notch. James Gandolfini and Edie Falcon playing as Tony and Carmela Soprano are spectacular to watch. I could go on and on about how amazing this show is, but that would mean revealing spoilers.

Before I started watching the show, I had never seen a single clip of it. The show premiered in 1999 on HBO. At that time, I was just a small child, and we did not have HBO at home (note: this is definitely not a family-friendly show). Even with the DVD box sets that came out, I never felt inclined to watch the show. I knew it was a critically acclaimed show and considered one of the best TV shows ever made. A part of me that was thinking this show was going to be probably overrated and boring. That has been my experience with some other shows that were considered critically acclaimed. So I kept putting it off. I knew the show ended with a black screen with nothing happening. If someone who has never seen the show or cared to watch it, why bother?

My argument is that even if, by the end, you are disappointed with the storylines, it is still worth a watch. The acting alone is worth watching because it is rare to have a powerfully acted cast in a show, let alone for multiple seasons. There have been TV shows that I kept watching, not because they were fantastic. I really wanted to find out what happened and only felt like I wasted hours of my life (I’m looking at you How I Met Your Mother). It also explores themes such as toxic masculinity, mental health, racism, relationships with elderly family members, and so much more. The fact that this show is over 20 years old shows it was decades ahead of its time.

At last, I leave you with this picture of Tony Soprano being joyful around ducks. If that alone doesn’t spark interest, I don’t know what else to say. 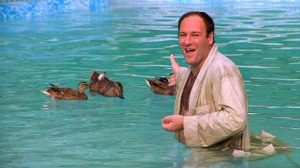 -Margarent Burke is a Technology Assistant at Lawrence Public Library.