There are few pleasures in my life like a fully immersive fantasy read. Followed by at least two more books that will give me something familiar and beloved, but also something new. I spend a good chunk of my browsing time in New Fantasy, skimming down the spines, looking out for that big, bold number one.

In the last year, I’ve embarked on not one, or two, or three, but six new journeys into distant, magical realms with names like Chaenbalu, Arthaloka, Hans Lollik, and...Yale University, a place as foreign and as fascinating to me as all the rest. As much as it pains me to finish these firsts in a series, knowing that the next installments are yet to be published, I get a lot of satisfaction from being able to claim OG fangirl status when these books become sensations. 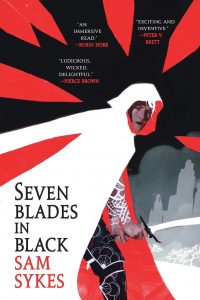 Plus, who doesn't kind of love that feeling of anticipation when you get the news that the release of the next book is imminent? I'm positively giddy about the sequel to Seven Blades in Black by Sam Sykes coming soon to our library. This book is up there on my last of 2019 favorites. Be warned: It is a TOME. But, of critical importance for all books of a daunting length, it grabs you in the first chapter and doesn't let go.

Tome: a book, especially a large, heavy one.

Sal the Cacophony is the badass protagonist, a warrior with a mysterious past. She makes her way across a battle ravaged wasteland called The Scar, checking names off of her list of mages to kill, vengeance for a terrible wrong. We meet a fascinating cast of characters along the way, including Sal's trusty weapon, the Cacophony, which possesses a blood lust all its own. This book is like a fantastical blend of Mad Max and Kill Bill. The action is nonstop, the laughs are plentiful courtesy of Sykes' dry wit, but with a bruised and broken leading lady like Sal, it also has a lot of heart.

Ten Arrows of Iron will be available on August 4th, 2020. 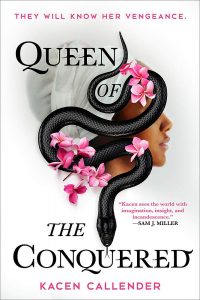 Expected in December 2020 is Book 2 of Kacen Callender's Island of Blood and Bone series, titled King of the Rising. Book 1, Queen of the Conquered takes us to Hans Lollik, a breathtaking island nation with a sordid (albeit familiar) history of violent colonization. Sigourney Rose has played her part well for years. Pretending to be a contrite and grateful noblewoman after her family is murdered, she is poised to take on the ranks of rulers, gain control of the islands, and ultimately free her people. But when they all assemble to decide who among them will be the childless king's successor, the candidates drop like flies, murdered one by one.

As Sigourney Rose struggles to solve the mystery killings before she becomes the next victim, we're introduced to an alternate universe of rampant racism, ancestral rage, and a people finding their power. Kacen Callender has done an excellent job of world building in this series debut, making Hans Lollik into a beautiful but terrifying place. The character development of Sigourney, a surprisingly polarizing heroine, is also top notch. 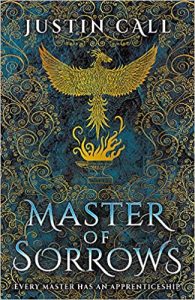 During the lockdown, when it was exceedingly difficult for me to get into any book I picked up, I stumbled upon Master of Sorrows by Justin T. Call. What a find! This is the story of Annev, a young apprentice with a mysterious past, who dreams day and night of becoming a Master Avatar (AKA a fetcher of illicit magical artifacts) for the prestigious Chaenbalu Academy. But he and his very Dumbledorian mentor, Sodar, share a deadly secret they've spent their lives protecting. Can they keep it long enough to see Annev declared a Master? And what then? A twist of prophecy sends the tale careening down an exhilarating (sometimes downright scary) path of no return.

This book was just so much FUN with some of the coolest and most original magic I've read in a long time. Master Artificer, Book 2 of the Silent Gods Series, is expected to be released in the US in February 2021. 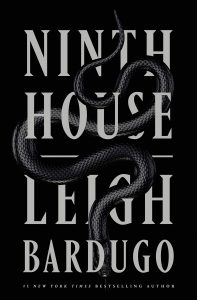 Leigh Bardugo has established herself as a fresh new voice in fantasy with her wildly popular YA Six of Crows series. Ninth House is her adult debut and it did not disappoint. Urban fantasy set mostly at Yale University, Bardugo's imagination pairs perfectly with the gothic atmosphere of New Haven.

Galaxy "Alex" Stern is a downtrodden young woman in desperate need of a do over when a mysterious benefactor offers her just that. In the form of a full scholarship to Yale, tasked with monitoring the activities of the school's secret societies. Mistrustful by nature and life experience, Alex finds it difficult to differentiate between friend and foe, who is operating within the rules of the Ninth House of Lethe and who is dabbling in evil. What follows is a tale of ritual sacrifices, dark magic, and dangerous people that culminates in one hell of a cliffhanger.

The second book in the Alex Stern series, so far untitled, is tentatively set to be published in June 2021.

I've run out of blog space to tell you about the rest of my favorites, but check out this list for more excellent fantasy reads you can get the jump on. Go ahead and give yourself something to look forward to!