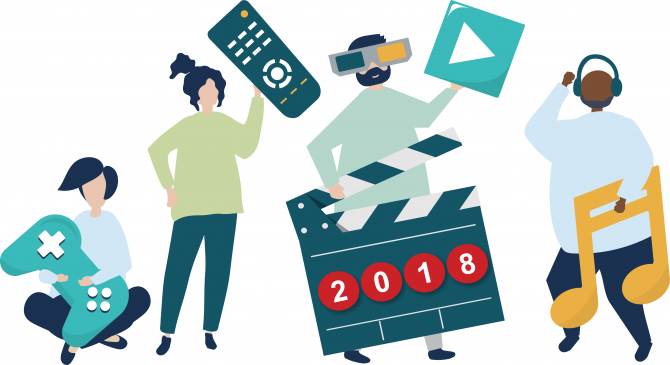 The Look Play Listen team spent thousands of hours watching film, TV, and streaming content in 2018, nodding their heads to new tunes, and mashing buttons till their thumbs were sore on all the newest video games to hit shelves this year.

Along with recommendations from fellow library staffers, they have nailed down the best of the best from a year that's nearly in the books.

Without further ado, here are the top recommendations from media and pop-savvy staff of Lawrence Public Library.

The library's team of media connoisseurs offers this parting gift to 2018 with a round-up of the movies that stood out in 2018.

I was wary of this movie because I do not prefer claymation/animated movies. But because of my love of animals and Wes Anderson films, I gave it a shot, and was delighted with the story and how well they were able to humanize dogs. -Angela

It takes a lot of scare me, but horror movies set deep in the forest/country will always scare the bejeebus out of me, because I live in a rural area. -Angela

Probably the sweetest movie that's ever been made. We don't deserve it. -Kevin

A round-up of the albums that accompanied us through the work day, followed us across country on road trips, epitomized new relationships, and became the soundtrack to 2018.

It's been a while since I found an album as gut punching as "Be the Cowboy". The album dazzles with songs such as "Remember My Name", "Me and My Husband", and the outstanding "Nobody". For anyone that feels the pressures of everyday life, this album might be for you. -Margaret

Bloom may not be as Sivan's pop-addictive Blue Neighborhood was, but it makes up for it with a more mature perspective and sound. At the ripe old age of 23, Troye Sivan has already had more than enough life experience to get him to this current level, musically. I am eager to see where life takes him on his future albums. -Ilka

Everything is Love is a collaborative album from one of the ultimate duos in the music industry, Beyonce and Jay-Z. Clocking in at only 38 minutes long, which may seem not enough for some, but more than enough for this powerhouse couple. It is one of the purest examples of balance and talent in recent years that I can think of. It's intense! -Ilka

In spite of its troubling development and some wonky (i.e. not good) controls, RDR2 is a breathtaking game/cowboy simulator with a great story to boot. I love walking around shouting "Mister" to everyone I see. Almost as much as I love hogtying the schmucks who pick fights with me before I leave them to starve out on the frontier. -Ian

Because Pokemon. Also because when you take Snorlax out of the pokeball, you ride on his stomach like he is a giant Totoro and what could be better than that. -Centi

I had my reservations about the Pokemon Go styled capture mechanics, but at least in handheld mode, they actually provide a nice change of pace. PLGP is a charming remake of the original games I still remember playing on my first Gameboy. -Ian

I'm having a blast exploring NYT as your friendly neighborhood wall crawler. Webslinging has never felt so good! -Ian

A round-up of the shows that enthralled us, got deep under our skin, and kept us up well past our bedtimes in 2018. See links at the bottom of the list for 2018's best movies, albums, and games, too.

Sandra Oh's performance is IMPECCABLE and not enough people have watched this. Please watch and then come find me at LPL so we can gush about how good it is. -Centi

If you loved BBC Planet Earth and the first Blue Planet, you'll love this, too. Still the gold standard in nature documentaries, and David Attenborough is still an inspiration as narrator, guide, and ecological godfather to us all. -Dan C

Lots of hilarious twists and turns in the plot. I look forward to the next season. -Angela