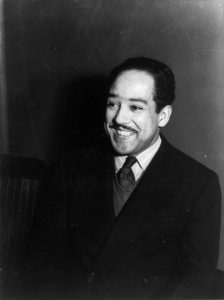 Last December, still in a post election funk (that has yet to dissipate) and shifting books, I stumbled across an illustrated copy of a Langston Hughes, opens a new window poem, "Let America Be America Again." The poem’s title seemed to riff on a now distant campaign slogan (I never imagined I’d miss the 2016 campaign), and it caught my eye."Let America be America again" is a plea, a lament, and a statement of resolve. The whole poem is well worth reading (seriously, read it), but I want to focus on its opening stanzas in particular:

(America never was America to me.)

Let America be the dream the dreamers dreamed—
Let it be that great strong land of love
Where never kings connive nor tyrants scheme
That any man be crushed by one above.

(It never was America to me.)

O, let my land be a land where Liberty
Is crowned with no false patriotic wreath,
But opportunity is real, and life is free,
Equality is in the air we breathe.
(There’s never been equality for me,
Nor freedom in this “homeland of the free.”) 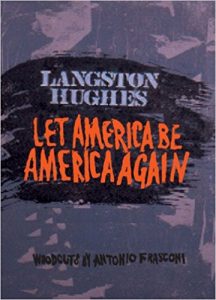 No matter your race, party, or creed, the words “America never was America to me” should bother you. They should sting. How many “me[’s]” are represented in that one devastating sentence? What a travesty that words written in 1935 can still ring true for so many today.

I don’t think I’ll ever forget the day I was spit on for not being white. I was in the seventh grade. As I got off the school bus and it started to pull away, I heard someone hock a loogie above me. Then I was covered in spit. My fellow bus riders were pointing at me and laughing. Two kids I barely knew (the culprits, I assume) were proudly sticking their torsos out of bus windows. One shouted “rice picker” as the bus pulled away. I stood there stunned. I wiped the gunk from my face and hair. Home was a couple blocks away.

A ridiculous racial epithet that followed me from middle school until I graduated. Just thinking about it makes me feel incredulous. Some days I laugh at the small-mindedness of it all. At the time it only hurt. I felt embarrassed to be myself. I felt unwelcome.

That was my first experience with America being less than what I had been taught.

As a Filipino American man, I know that my exposure to prejudice doesn’t amount to a drop in the bucket. It doesn’t compare to the myriad struggles that countless Americans have confronted or the disenfranchisement that millions of fellow citizens are made to feel daily.

"Let America be America Again" is deeply rooted in that anguish. It is a heartbreaking poem that doesn’t shy away from the exploitative capitalism and institutional racism its author faced. But at the same time it is an inspiring and defiantly hopeful work of literature. Hughes didn’t retreat. He didn’t cower. He recognized his self worth and and waited for a day when his homeland would do the same:

O, yes,
I say it plain,
America never was America to me,
And yet I swear this oath—
America will be!

Let’s go back to the beginning. Not to the historical America of 1776 or to some idyllic America that never existed for the majority of us. Let’s go back to the American promise. The American Dream. Back to the city upon a hill. Back to “All men are created equal.” Back to the country that not only welcomed “the homeless, tempest-tossed” but demanded to be given “your tired, your poor, your huddled masses yearning to be free.” Let’s go back to the beginning and refamiliarize ourselves with those lofty, worthy, admirable ideals. Forget about some nativist, exclusive, reactionary idea of greatness. Let America be herself. Set fear aside, listen to our better angels, “and make America again!”